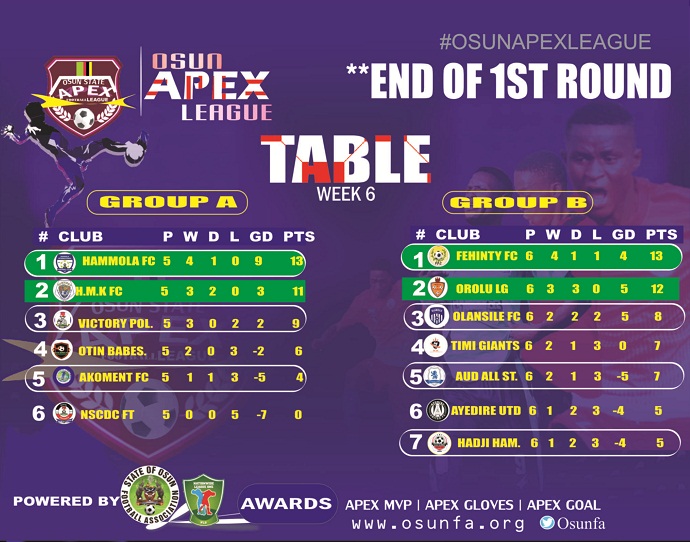 Terrific goals, brilliant moments, ecstatic situations, sensational reactions trailed the first round duels of the much publicized Osun Apex League. The Match Day 7 proceedings concluded the league in its first round. Olansile FC took their rival from Ede, Timi Giants into cleaner, the match which is decided at Osogbo Township Stadium ended 3-1 in favor of Omo Mummy Boys.

Interestingly, high flying Hammola FC concluded the first round with 4-0 mauling of their guest Akoment FC in Ede, while Victory Police were 4-1 better off their host Os NSCDC. H.M.K also continues its fine form with 2-1 defeat of Okuku based side, Otin Babes FC.

A total number of 101 goals were scored from 36 matches played. Hammola FC, H.M.K FC and Orolu LG FC are yet to lose any game thereby taking their blistering forms into second round.

Hammola FC and H.M.K are leading group A while Fehinty FC and Orolu LG FC are group B leaders. The top two teams in each group would eventually qualify for Super 4 to determine the actual league winner.

Osun Apex League is packaged and financed by Osun FA under the distinguished sports financier Alhaji Rasaq lshola Mustapha RIM. The Grand Prize of 120, 000 and 100, 000 have been earmarked for the eventual winner and runner’s up. There are countless exciting gifts also for participating teams and individual awards are also in the offing. The second stanza will kick start again by Wednesday, 20th October 2021.