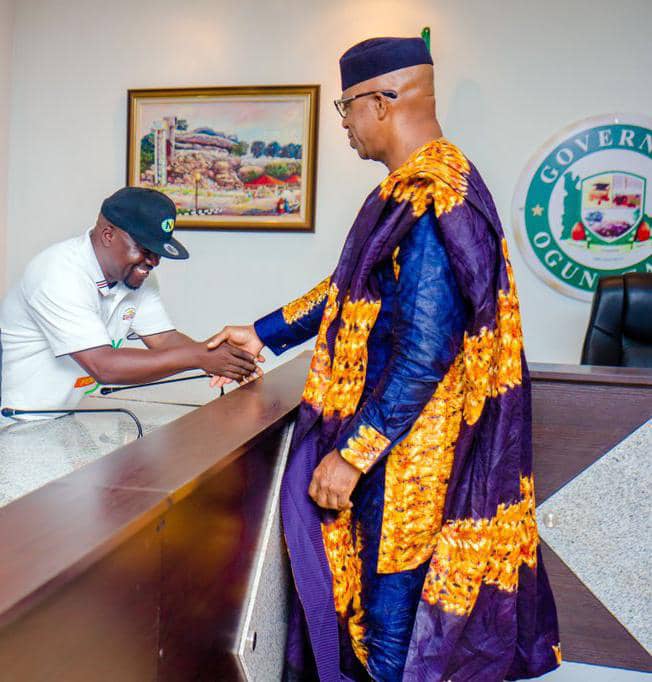 Former commissioner for youth and sports in Ogun state, Hon. Bukola Olopade has showered encomiums on Governor Dapo Abiodun for designing a laudable roadmap for sports development and promotion in the Gateway state.

Governor Abiodun on Sunday played host to the Hon. Sports Minister, Sunday Dare at his Oke Mosan office in Abeokuta, the state capital and hinted the sports custodian about the plans his administration has for sports

During the meeting, the number one citizen in Ogun state keyed into the “adopt an athlete” plan of the sports ministry and took responsibility for Ijebu Ode, Ogun state born, Nigeria medal hopeful at the Tokyo Olympics, Tobiloba Amusan.

The Governor noted that as well as looking forward to hosting the National Sports Festival in future, arrangements are in top gear for His administration to put up a Sports Trust Fund and a Sports Commission which will put the sports sector in proper perspective with priority attention.

Hon. Olopade who was the commissioner of sports in the Gateway state in 2006 when Ogun state hosted what is adjudged the best National sports festival in recent years, said the governor is already on the right path with his intentions, and expressed optimism that the dreams will soon become a reality

“I am aware of the governor’s plans right from day one, he’s very keen and passionate about this sector and the steps he is taking has shown that success will be recorded”

“Putting in place the sports commission and Trust Fund will no doubt elevate the sector and definitely take Ogun state to the enviable height it truly belongs, I am using this medium to appreciate our sports loving governor, it’s my prayer that his dreams and plans for sports would eventually get to see the light of the day”.

He urged all stakeholders to identify with the Public Private partnership idea of the government of the day, and raise the sporting standard along with governor Abiodun’s administration.