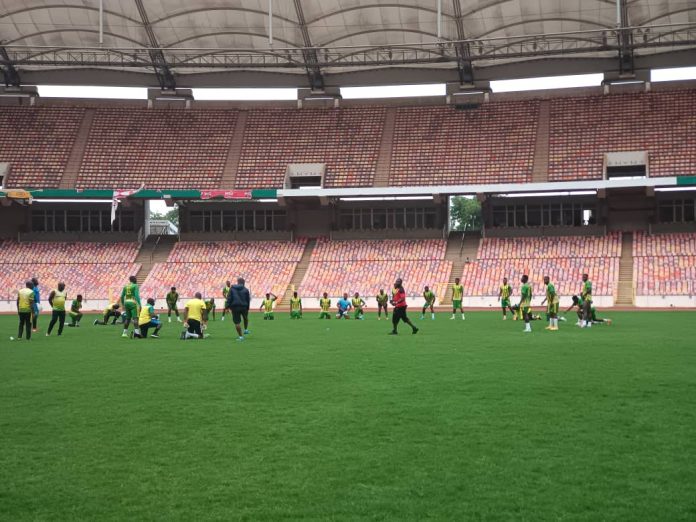 Plateau United players on Saturday had a feel of the pitch at the MKO Abiola Stadium as they finalised preparations for the second leg, the preliminary stage game against Gabonese side AS Mandji.

Coach Fidelis Illechukwu and his wards had a light workout and did some tactical demonstrations for the game on Sunday.

The first leg ended in a 2-2 draw which has put the team in good stead for the return leg but the players told Plateau United Media that they have put the game in Franceville behind them and are looking forward to Sunday’s encounter with renewed vigour.

“We are glad we got a draw in Gabon and scored two away goals. We could have even won the game but we had some slips, “long throw specialist Daniel Itodo said.

‘That game however has come and gone. We are not thinking about it anymore. Sunday’s game is a new game and we will take it as if it is a final.

“The mood in the camp is a good one and o am optimistic we shall come out victorious and qualify for the next round,” he added.

In a related development, the club, to bring the team and its activities closer to the fans has launched ‘Plateau United TV on YouTube.

The channel will be dedicated to content on the club and her activities to engage more with the fans.

Consequently, the YouTube channel will be launched with a live stream of the game against AS Mandji at the MKO Abiola Stadium.

The club also wishes to reiterate that the gates will be open free for fans to come and cheer the team while those who can’t make it can watch the match live on the club’s new YouTube channel.

Plateau United played a 2-2 draw with AS Mandji last weekend in Franceville and will look to qualify for the next stage with a victory over the Gabonese on Sunday.

The winner of that tie will face Tunisian giants Esperance de Tunis in the next round.