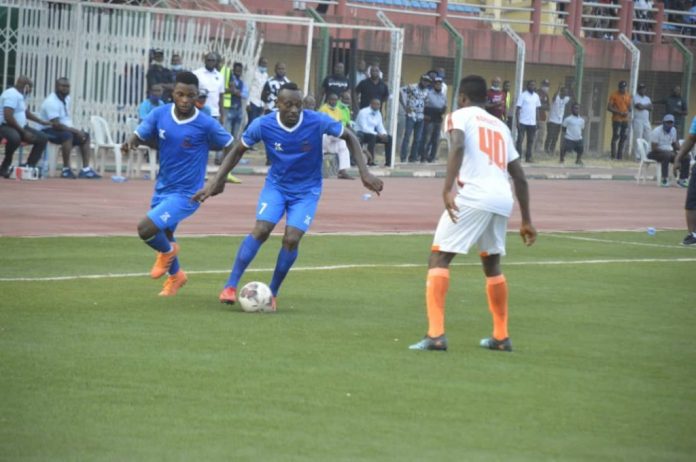 Recovering from the last week loss in Kaduna to Jigawa Golden Stars, Lobi Stars came out red hot Sunday May 16 in an NPFL 2020/2021 in Makurdi to show superiority over hard fighting FC Ifeanyi Ubah in Match Day 21 to end it 2-0.

True to the elements of the preview, FC Ifeanyi Ubah exhibited serious resistant, coming close at several intervals, but the overall capacity of Lobi Stars stood firm with a match winning mentality.

Tragedy almost struck as jumbo size Lobi Stars goalkeeper Stanley Nwabali crashed with FC Ifeanyi Ubah’s captain Uche Onuoha in a 50-50 situation, it took the intervention of the of a combine medical team of Lobi Stars and FC Ifeanyi Ubah to arrest the situation as the well equipped ambulance move closer to the scene before he was resuscitated.

The exchange of fire works only paid off in the 37th minute when Ossy Martins put Lobi Stars ahead off Ebube Duru’s delivery from a short corner kick on the right for the opener. Several other attempts to increase the goal tally ensued but Goalkeeper Sharp Uzoigwe stood between Lobi Stars and an increase till the end of first stanza.

Upon resumption, Kabiru Dogo introduced Chinonso Okonkwo and Abiodun Kayode to take over from Nnamdi Egbujuo and Austin Ogunye to add power to Lobi Stars attack. The change seemed positive as FC Ifeanyi Ubah were completely placed on the defensive.

Ossy Martin’s clinical 51st minute interpass with Nonso Okonkwo on the right got Martins down the line as he out ran all the opponents and did a quick cross for on rushing Monday Akile who missed the step that would have made it easy for him to convert for a goal.

Lobi Stars’ persistent hunt for more goals got a boost as Goalkeeper Stanley Nwabali’s 62nd minute long hand service to Ossy Martins who over powered the defence of FC Ifeanyi Ubah to deliver a precise cross to Monday Akile who made no mistake this time to effortlessly tuck in to the net for the second goal for The Ortom Boys.

In the 85th minute, Monday Akile, scorer of the second goal was on ground and the Referee stopped the game to observe and call for medical attention, he was as a result, replaced by Douglas Achiv 3 minutes later, while Adakole Benedict took over from Ossy Martins 1 minute to full time.

Last minute reaction from Ifeanyi Ubah almost narrowed the goal margin but last gasp for defence by Alex Aghahowa blocked the shot in to corner kick to save the Coach Kabiru Dogo tutored lads. The centre Referee ended the game at 90+2 minutes after the corner kick was taken.

Lobi Stars will be on the road to Lagos later in the week to confront MFM in an NPFL Match Day 22. With this result, Lobi Stars are now placed 8th position on the log as against 11th before the game.