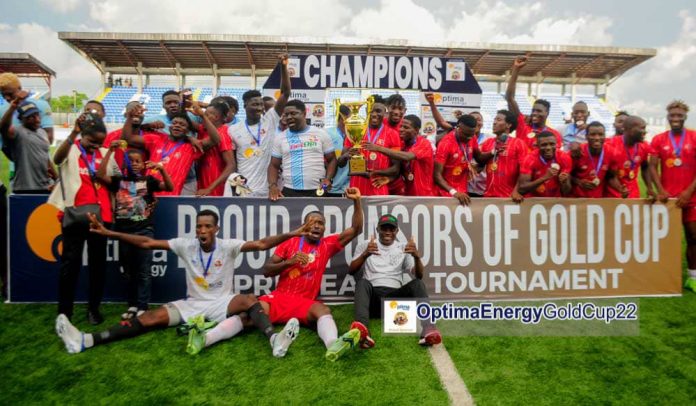 Remo Stars made history becoming the first team to win the Optima Energy Gold Cup title back-to-back and had goalkeeper Vincent Edafe to thank as he showed class during the penalty kicks after he made two saves.

The battle to claim the bragging rights lived up to its billing, as it was end-to-end football and fireworks from both teams.

The first real chance of the game came the way of the Oluyole Warriors in the 20th minute.

Samuel Stone muscled out two Remo Stars defenders to set up Tony Okachi who went past his marker to flick the ball into the box, leaving Edafe to push the ball awkwardly to the path of Joshua Akpan, but the attacking midfielder put his effort wide.

The Sky Blue Stars could have punished the Oluyole Warriors 12 minutes later after Samuel Anakwe dazzled past his markers but couldn’t off despite having goalkeeper Bamidele Adeniyi beat in goal.

Six minutes into the second half, Okorom Stanley’s superb strike at goal from a set piece was easily saved by Bamidele as he was sharp with his timing of the ball.

With 10 minutes to end the game, Bamidele made two saves in less than two minutes, from a low drive shot and corner kick to deny the Sky Blue Star.

With no winner in regulation time, both teams needed spot kicks to settle scores.

It was Remo Stars that had the day after scoring four while Edafe was outstanding after he stopped two spot kicks of Shooting Stars.

The victory had Remo Stars smiling home with One Million Naira and a beautiful gold-plated trophy while 3SC was rewarded with half a million Naira.