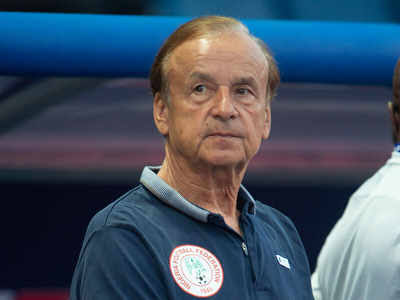 Nigeria coach Gernot Rohr has stated he is focused on the 2022 Fifa World Cup qualifying games against the Central African Republic and he does not want to think about reports of his unpaid salaries.

Rohr has battled with delayed salary payment since he took charge of the three-time African champions in 2016.

After Rangers centre-back Leon Balogun voiced out over the unpaid salaries and bonuses in July, the Nigeria Football Federation responded immediately and vowed to pay all outstanding fees.

When asked if he has been paid his salaries ahead of Thursday’s match at the Teslim Balogun Stadium, Rohr said: “I will answer with a big silence because one day before the match I don’t want to think about these things, I want to focus on my team, on the game, on our strategy and the dry training session and let’s speak about it soon after.”

Last year, the former Bordeaux manager said he agreed to a pay cut in his new two-year contract that was signed in May 2020. The new deal includes a clause to reside in Nigeria and also receive his salary in local currency – naira.

Nigeria began preparations for the double-header fixtures against the Central African Republic on Monday but Rohr has lamented the inadequate time to get his players ready for Thursday’s clash in Lagos.

“It’s really not enough,” the 68-year-old said when asked about his team’s readiness.

“Fortunately, we have some players who arrived for Monday’s training session so we could have a short one with some of them.

“In the morning, there is a good fitness condition in the hotel which is why it is good to have all of them together for training sessions so that we can have a good harmony.”

The Super Eagles sit atop of Group C after wins against Liberia and Cape Verde Islands in their opening fixtures.