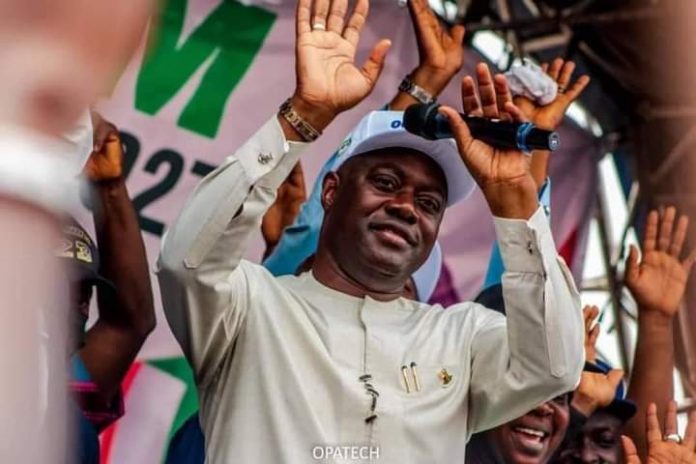 It is no longer news that our darling Shooting Stars Sports Club of Ibadan have returned to the elite division of Nigeria league, the NPFL where they rightfully belong.

Without any exaggeration the past four years weere no doubt period of pains and agony for 3SC fans. It was traumatic for these fans watching Nigeria’s trailblazer and one of the biggest and oldest clubs in Africa playing at the lower division for four long years.

The expectation of the living among these legends who had not only made history with Shooting Stars, but also donned the green – white – green national colours of Nigeria’s Eagles and have won laurels for this country at continental and global levels is to see their former club to bounce back to reckoning.

The die hard fans of the Oluyole Warriors who endured terrible times when former African champions were rubbing shoulders with smaller clubs with no pedigree as the Great Shooting Stars, have the sports loving Governor of Oyo State, Engineer Seyi Makinde to thank for the redemption of their darling club.

No doubt a God sent man, Governor Seyi Makinde (GSM), a God sent man provided all supports and motivations which catapulted 3SC to the elite division of Nigeria league.

The sports loving Governor who has also been supporting sports development in the state did the unusual, retained the team’s old management team he inherited from his predecessor (not minding political consideration) and tasked them to ensure prompt return of the team to the NPFL.

Governor Makinde backed words with action by providing the team management and players all the moral and material resources needed and gave them the free hand to do their job without undue interference.

The results of this Benevolent leadership is the promotion of 3SC to the NPFL in a grand style.

Like all other joyous fans of Shooting Stars Sports Club, I thank you GSM, the God Sent Man. I also give kudos to the Technical Crew led by a former Shooting Star, Edith Agoye, backroom staff as well as ex International Dimeji Lawal (amiable TM) and the Big Boss himself Rasheed Balogun.

Others who also deserve commendations over this feat are the returning Commissioner of youths and sports Asiwaju Seun Fakorede, the FA Chairman Oba James Odeniran and his powerful Secretary Kehinde Ojelowo.We are grateful. They all deserved a part on your back.

The contributions of the state sports council chairman Honourable Gbenga Adewusi as well as the GM Gboyega Makinde and several aides of the Governor can never be overemphasized.

I congratulate all 3SC supporters and fans.

As we are still basking in the Euphoria of the victory and promotion, the people’s governor delivered another good news with the donation of a new brand luxurious buses to the 3SC and Crown FC of Ogbomoso.

What a man full of passion!, God bless GSM. We sports loving people of Oyo state are lucky to have you.

Now that Shooting Stars have been revived through the goodwill of GSM, I will appeal that Governor Makinde’s good gesture should be extended to other sports in the state (especially athletics). We urgently need a bus for athletics so as to aid our movements for various competitions. Oyo is now one of the states to watch in athletics after our virtuoso performance at the last National Youth Games and the just concluded National Sports Festival.

It is my belief that we will surely regain our place in sports in Nigeria with a performing Governor as GSM.