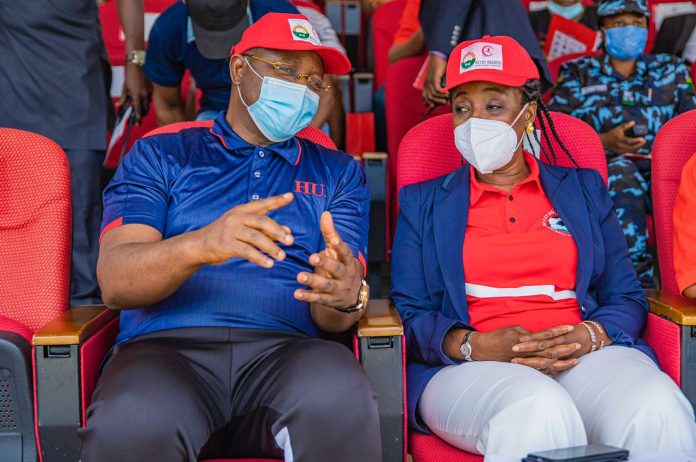 Youth and Sports Development Minister Sunday Dare has challenged the wives of States’ Chief Executives to emulate the First Lady of Edo State, Betsy Obaseki in the areas of youth and sports development.

Speaking at the closing ceremony of the first edition of the Betsy Obaseki Women Football Tournament in Benin city, Edo State on Sunday, the Sports Minister urged other women in positions of influence and authority to use their good offices to promote sports and other good causes.

Twelve teams, eight of them in the Nigeria Women football top flight league participated in the tournament, earning handsome cash prizes in the process.

Winners Bayelsa Queens earned the top prize of five million naira, runners up Rivers United got three million naira. Third and fourth placed Edo Queens and FC Robo got two and one million naira respectively while all the other teams that could not go beyond the group stage smiled home with half a million naira each.

Her Excellency, Betsy Obaseki also used the tournament to preach against human trafficking and other gender based abuses and crimes.

“What the First Lady of Edo State has done is worthy of emulation,” Sports Minister Sunday Dare told the audience at the closing ceremony, “the impact, not just in sports but on the social lives of these young girls cannot be quantified.

“Helping to fight against social vices like human trafficking and other discriminatory offences against women using sports is something that all influential women in power should do,” He added.

Some of those present at the closing ceremony of the tournament were the First Ladies of Osun and Bayelsa States, the wife of the Deputy Governor of Edo State Comrade Maryann Philip Shaibu and the first vice president of the Nigeria Football Federation, Barrister Seyi Akinwunmi.