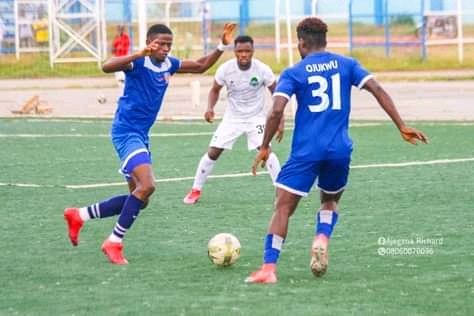 Under a wet afternoon at home, Sunshine Stars FC of Akure threaded out of the murky waters of relagation in the NPFL, securing a hard fought 3-2 win over Plateau United on matchday 36.

Needing to get back to winning ways after the disappointing trip to Lafia, the Akure based team took time to find rhythm, just as their visitors struggled to settle.

Moments later, the visitors tried to respond with a free kick, but Saliu Suleiman put some big hands behind the ball to stop Wasiu Jimoh’s powerful free kick.

As halftime approached, a sloppy defending opened up Sunshine Stars, leading to the goalkeeper spilling an attempt in the direction of Aliyu, who made no mistake in poking it home for the visitors’ equalizer.

The second half opened up gradually as well and afforded Coach Deji Ayeni the chance to ring some changes on his side.

Just after the the hour mark, one of the substitutes, Kolade Adeniji made his introduction count, as he followed up and benefited from a back pass which he turned home to restore Sunshine Stars’ lead.

With eight minutes remaing, the referee made a big call, awarding the away side a disputed penalty which drew protest from the home side, regardless, Muhammad Zilkifilu converted to draw Plateau level.

Sunshine Stars picked up their game again, and inside the first four of a prolonged added time Ejike Uzoechi, out of the blues, struck from yards out to score a crucial third for the Owena Whales in the tensed encounter.

Ejike’s goal in added time proved to be the match winner, as Sunshine Stars leapfrog out of the redzone, sitting a point above the bottom four, with two matches to go.