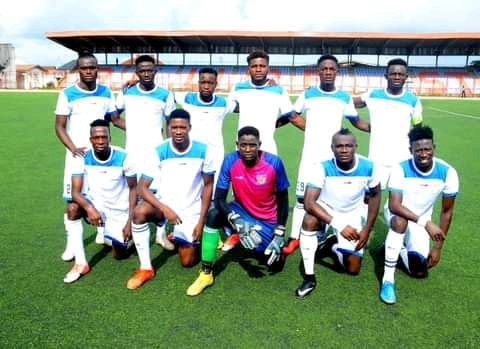 Ekelojuoti had earlier been denied by Alladoun Kolimba after 10 minutes, while Ifegwu Ojukwu and Tunde Bello saw their header and free kick kept out in a first half that had three Sunshine Stars’ penalty appeals ignored.

Nonetheless, Ekelojuoti broke the deadlock eight minutes into the second period by guiding in from an incisive Ibrahim Ajani’s cut back ball, to hand the hosts the advantage.

Ekelojuoti had the chance to grab his second in the 54′ but he miscued from Habib Yakub’s cross in front of goal under tight marking, before combining brilliantly with Sadeeq Yusuf for another thwarted opportunity in the 67′.

The game could have been put to bed six minutes from time when Yusuf found himself alone with the onrushing Kolimba, however the hitman dinked just wide in disbelief.

Regardless, Sunshine Stars comfortably preserved Ekelojuoti’s goal for the victory that took their point tally to 30 ahead of Sunday’s meeting with Heartland in Owerri.