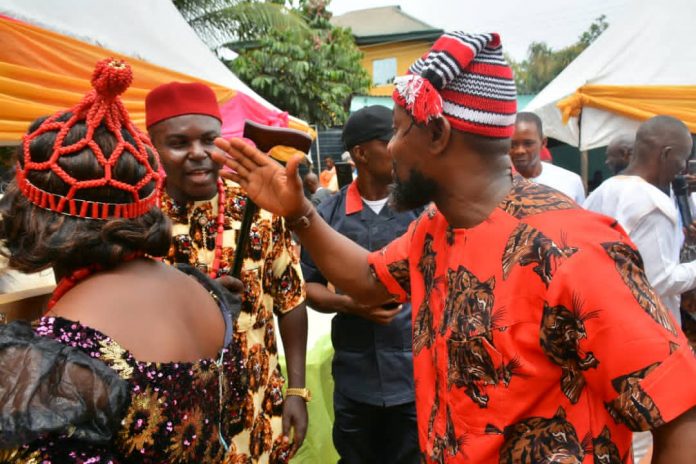 For the Executive Secretary of the Nigeria Professional Football League (NPFL) Club Owners Association of Nigeria, Chief Aloysius Chukwuemeka Chinekezi Ebonugwo, popularly referred to as ACC, it was a story of a prophet honoured in his community, as he was on Friday April 9th, 2021, conferred with a traditional title of NWACHIGOZIRI 1, of Umualumaku Community in Ehime Mbano in Imo state.

Football enthusiasts from all around the nation, sports journalists, friends and well wishers converged in the ancient community of Umualumaku, in Ehime Mbano in Imo state to honour the man of many parts, class and cadre.

He is the man of many parts because, as an Igbo man, he speaks other Nigerian languages like Yoruba and Hausa.

That also makes him fit into any cadre of life at any point in time, and adjusts to any situation that comes his way, with not only his body language, but his words, breaking all barriers and obstacles because of the influential intelligence that God has endowed him with.

He is absolutely an embodiment of humility, transparency, a peace maker.

He is all in all in the round leather game. He was a player. He is a Retired Grade One Referee, a Journalist, a Commentator and Analyst, Administrator of repute, and the ‘Network’ himself.

Back then, he started cutting his administrative teeth when he was the Secretary of the Igbo Traders Football Association (ITFA), a football controlling organization under the auspices of the Igbo Community Association in Kwara state.

Chief Chukwuemeka graduated with First Degree Bsc (Geography) Certificate from the ‘Better by Far’ University, University of Ilorin, before obtaining his Post Graduate Diploma in Journalism from the International Institute of Journalism (IIJ).

He returned to the University of Ilorin to bag his Masters Degree in Public Administration.

ACC, as he is fondly called, played active football in his early years when he was nicknamed after the legend Cameroonian Roger Miller before injury knocked him out of playing active football.

For his passion and love for football, he joined the Nigeria football Referees Association (NFRA), Kwara State Council and rose to become a Grade One Referee.

He was the longest serving Secretary General of the Igbo Traders Football Association (ITFA) Ilorin, where he served meritoriously and was named the ‘’ITFA Ambassador’’.

As a seasoned sports journalist, ACC rose from PRO of Kwara State Chapter of the Sports Writers Association of Nigeria (SWAN) to become the Vice Chairman and progressed to a 3rd term National Executive Officer of the Association for nine years.

He was Media Officer of Yobe Desert Stars Damaturu and a classroom teacher in Babura Jigawa State during his NYSC programme.

He was amongst the Nigerian delegation to the NPFL-LALIGA tour to Spain as well 2018 world cup in Russia.

He also has a FIFA Certificate on Football Administration/Management, as well as a FIFA accredited TMS manager.

And because of his numerous contributions to the uplift of his community, the community, led by His Royal Highness, Eze C.U Okoro Aku 1, rolled out the drums to celebrate the true son of

Umualumaku Community, in Ehime Mbano, and also conferred on him, the NWACHIGOZIRI 1, alongside his wife, Mrs Helen Nkechi Chukwuemeka. This is an honour even the reverred in the society do not get or deserve in their communities. And this has to do with many factors, underscored by huge sacrifice.

He was honoured for his contributions to unity and peace, sports development, support to community development and humanity.

Chief Chukwuemeka is the donor and sponsor of the yearly Umualumaku Unity Cup, donor to Ehime Mbano United FC, donor to Mbano Unity Cup competition and several community services to his people.

He is a member and pillar of Catholic Men Organization and a Man of the People with high level of integrity.

The honour to Chief Chukwuemeka coincided with the birthday of his mother, Ezinne Felicia Adamma Ebonugwo, who was 87th.

His wife, Mrs Helen Nkechi Chukwuemeka is a banker, and a Master Degree holder (Business Administration) from LAUTECH University Ogbomoso.

To the ‘Man of the people’, it’s no doubt, great honour to whom it’s due.