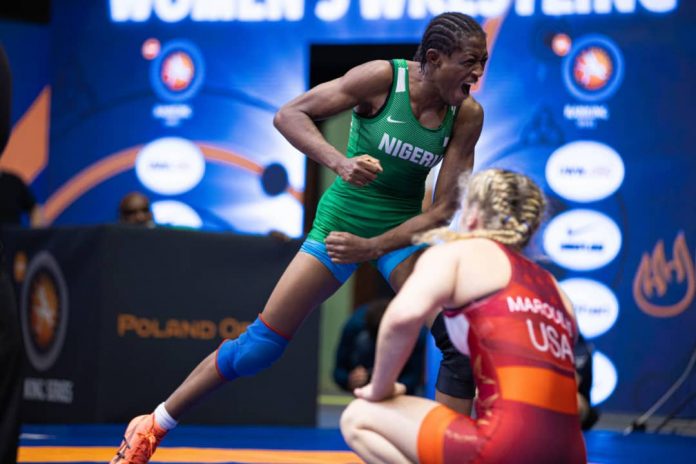 Reigning Commonwealth champion Odunayo Adekuoroye says she is not under any form of pressure ahead of the Tokyo 2020 Olympics in Japan, and remains confident of claiming a historic gold medal for Nigeria in wrestling.

The 3-time World Championships medalist Adekuoroye and four other Nigerian wrestlers will be attempting to do what none of their compatriots have been able to do at the Games previously – winning an Olympic medal.

Having established herself globally as one of the best wrestlers in the 57kg category, expectations are high that the 27-year-old would deliver Nigeria’s first-ever wrestling medal in Tokyo.

Such expectations usually come with pressure, however, the 6-time African champion says she is physically and mentally ready for the Games, adding that she enjoys a huge support from her team in camp.

“I’ve trained physically. Mentally, I have trained myself. And my coach has been on me every time. Even the President (Daniel Igali) still comes to our training just to teach me some things.

“So, having an Olympic champion (Daniel Igali) in my gym, having a world-class coach (Purity Akuh), and my training partners are doing brilliantly well. So, I don’t have any pressure going to the Olympics.

“I believe by the special grace of God, it’s my time to shine. So, I will definitely bring gold to Nigeria by His grace.”

In readiness for the Tokyo Games, Adekuoroye won gold at the Poland Open Ranking Series tournament last month, impressively demolishing World and Olympic champion Helen Maroulis of USA 13-0 via technical superiority on her way to landing the 57kg top prize.

The 2-time Commonwealth champion says her performance at the Poland Open inspires the confidence needed to excel in Tokyo.

“For me, it’s like a pre-tournament for the Olympic Games,” she said. “Doing well in Poland gives me more confidence going to the Olympics.

“At least, most of the wrestlers I may wrestle with in the Olympics, I wrestled against them in the Poland Ranking Series, So, it’s a very good tournament for me. For like a year plus, I’ve not been to any international competition (due to Covid-19).

“So, going to Poland Ranking Series and performing excellently well is a very good competition for me ahead of Tokyo.”