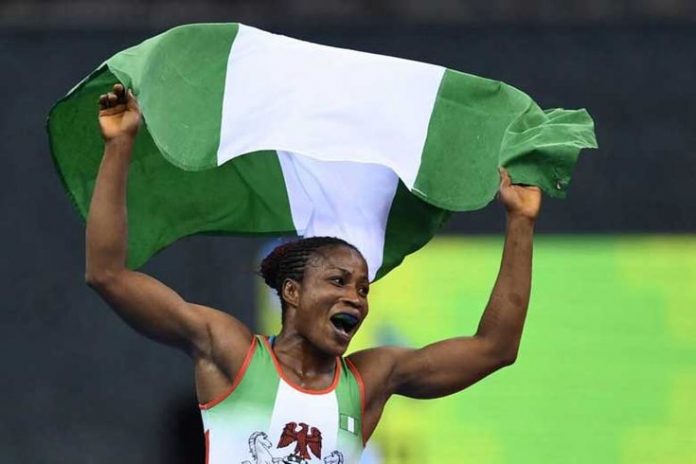 Commonwealth gold-medalist Blessing Oborududu (68kg) and 2018 African champion Ekerekeme Agiomor (86kg) have both talked up their chances of winning medals for Team Nigeria at the Tokyo 2020 Olympic Games, which gets underway on Friday.

The duo are part of five wrestlers that would fly Nigeria’s flag at the delayed Summer Games in Tokyo.

After an intensive camping exercise for over two months, 10-time African champion Oborududu, who would be making her third appearance at the quadrennial Games, believes now is the time to make a difference, after failing to land a medal at her two previous attempts.

The former world number two said she is a better wrestler now, dispelling any form of pressure ahead of the Tokyo Games.

“A lot has changed, the mindset and more tournaments that I have attended, as well as training,” Oborududu said. “I know that there will be a difference in Tokyo 2020.

“For me, I don’t have any pressure. I’m calm, training and I pray that God should crown my effort with success at the Olympics.”

For Olympic debutant Agiomor, the only male wrestler in the team, he insists he’s not in Tokyo to make up the numbers, stating that he is poised to ‘create record’ at the Games.

“I’m not just going there (Tokyo) for going sake. I have something serious because I’m going there to achieve something, to create record. That’s my target,” he disclosed.

“And I have trained well. It’s only God that will fight for me, because during the (Olympic) qualifiers, this was how I trained and kept myself to qualify.

“I believe with God I can do something better (in Tokyo).”

Oborududu and Agiomor, as well as Odunayo Adekuoroye (57kg), Aminat Adeniyi (62kg) and youngster Adijat Idris (50kg) would be attempting to win Nigeria her first wrestling medal (s) at the Olympics, when competition gets underway from 1 to 7 August.