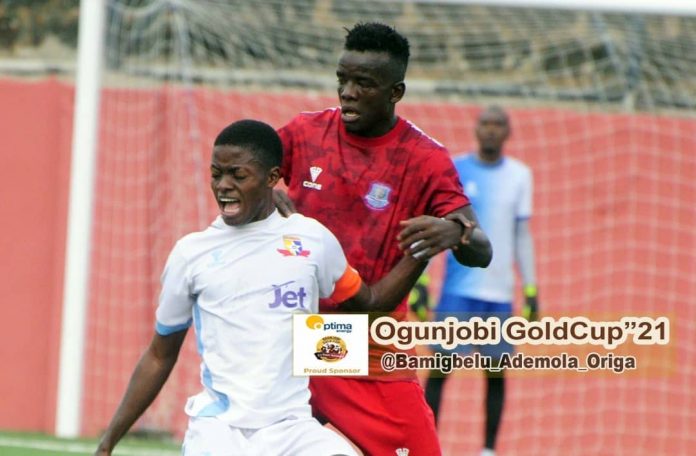 Newly promoted Nigeria Professional Football League (NPFL) Niger Tornadoes kept their quest for a second Ogunjobi Gold Cup title alive as they beat Beyond Limits by two second half goals in their opening Matchday One game of the pre-season tourney.

The game at the FC Ebedei Stadium in Sagamu lived up to its hype as it got fans spellbound from the ref’s blast to the final whistle.

The Ikon Allah were pushed to their limits as it took them 52 minutes before they could break the resilience of Beyond Limits energetic defence line.

In the opening quarter of an hour, Tornadoes should have easily been one goal up but Beyond Limits had Olisa Emmanuel to thank owing to his sharp reflex save.

The goalkeeper was at his best as he forced off a superb save from Abubakar Babaji’s sublime free-kick from 25yards.

In the 49th minute, Emmanuel showed why he is the first choice shot-stopper as he denied the Ikon Allah what could have been their first goal as he pulled off another save.

Beyond Limits could have shocked Tornadoes with their fantastic counter-attacking play from young lads, but a rocket shot by Muyideen Olude from 25yards beat goalkeeper Yinka Daniel but only to rattle the woodwork.

The young lads then paid dearly for a schoolboy defending in the 52nd minutes as Igbudu Alpha of Tornadoes became the first player to open a goal account in the 9th edition of the Ogunjobi Gold Cup.

As Tornadoes defended their one goal lead up till the 90th minute, Usule Martins then put the icing on the cake for his team scoring a second.