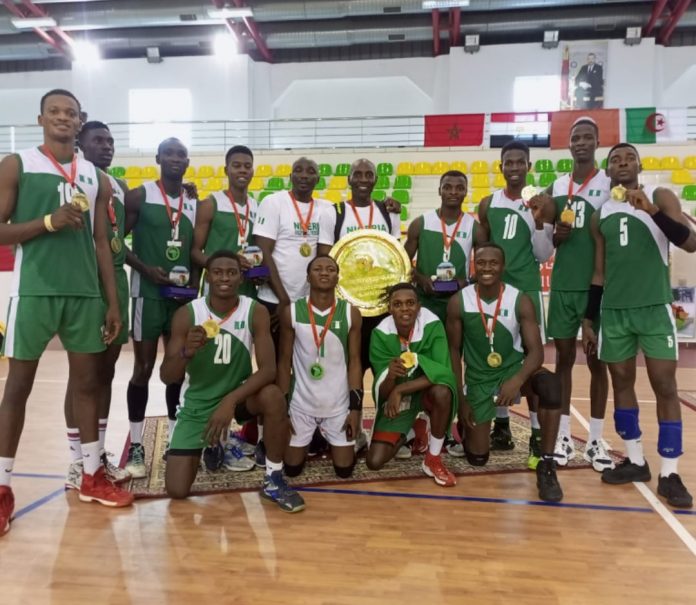 The President of Nigeria Volleyball Federation (NVBF), Engineer Musa Nimrod has congratulated Nigeria U19 Boys Volleyball Team for qualifying for the U19 FIVB Boys’ World Championship in 2023 after their emphatic final victory against Egypt 3-0 (25-18, 25-20, 31-29) at the just concluded U19 Boys African Nations Volleyball Championship in Morocco on Sunday

Nimrod lauded the performance of the players throughout the championship as well as the technical crew for their efforts in ensuring Nigeria remains champions.

The Secretary General of Confederation of African Volleyball (CAVB) Zone 3 says he looks forward to the next generation of upcoming stars, who through hard work, discipline, resilience and determination, will one day win the World Cup for Nigeria.

He said, “I am impressed with the performance of the team throughout the championship and for maintaining its dominant posture as defending champions of the U19 Boys African Nations Volleyball Championship. The technical crew have also shown their abilities to interpret games during crucial periods.

“Having won the tournament twice in 2020 and 2022, under this board, I am assuring you of the board’s total support as well as the volleyball community.

“Nigeria is the first Sub Saharan African country to win the Championship twice and attended the World Championship twice. It is my prayers that this current crop of players will surpass the 14 position placed by the previous teams”