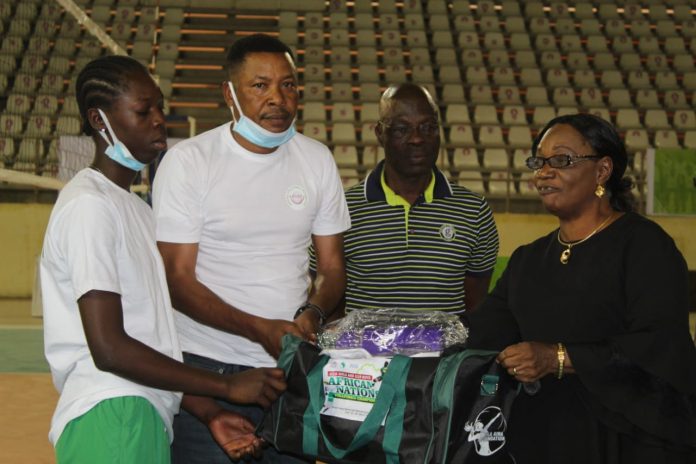 The Vice President of Nigeria Volleyball Federation, Professor Florence Adeyanju and Ex International, Lola Aina has tipped the national U18/U19 as one of the favourites to win the 2021 African Nations Volleyball Championship in Abuja.

Professor Adeyanju and Aina gave the hints during the presentation items to the teams on Monday.

Adeyanju believes that the team have the potential to better Nigeria’s previous achievement at the last tournament in Kenya.

She said, “The country had always been blessed with talented and glory-seeking young Volleyball players.

“I believe the present crop of players in the country will do better than our own time. They stand a bright chance of representing the country at this year’s World Championships”.

Former captain of Niger women’s volleyball team believes that the U18 Girls and U19 Boys can make the nation proud.

Aina who was represented by the Coordinator Lola Aina Foundation, James Asoa urged Nigerians not to lay unnecessary pressure on the teams.

“The Nigeria U19 Boys are the favourite in this tournament because they are the team to beat and that is why it is not surprising when you see teams who play against them come out in full force.

“Those who tip the boys as favourites are not wrong because of the quality of players they parade.

“Nevertheless, I would want us to move step by step and see how we progress in the competition”.

Lola Aina an ex international, former Captain of the Nigeria Volleyball women’s team donated bags, water bottles and backpacks to the 28 players planning to represent the country at the U18 Girls and U19 Boys African Nations Volleyball Championship in Abuja.