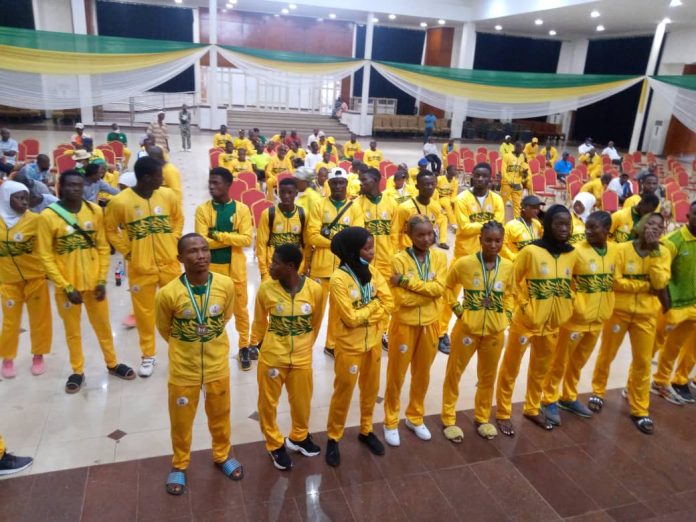 The governor who was represented by the state Head of Service, Mrs Modupe Susan Oluwole said the result is a reflection of the giant stride of his administration in sports development.He advised the athletes never to rest on their oars but continue to work hard and be the best they can be in their chosen career.

Special cash was also pledged to Eniola Bolaji for winning gold medal at the paralympic in Spain.

Representing the Speaker of the Kwara State House of Assembly, Chairman House Committee on Sports, Hon. Awolola Olumide Ayokunle thanked the Governor for his great achievement in sports in the short period.

Awolola revealed that, sports were nothing to write home about before this administration, saying Mallam AbdulRahman AbdulRazaq’s government has changed the narrative for good with many projects at the stadium speaking volume on his efforts.

The lawmaker assured the House’s optimum supports to the athletes and to sports development generally in the state.

For her part, the Permanent Secretary, Ministry of Sports and Youth Development, Barrister Iyabo Banire also thanked his Excellency for recognizing the outstanding performance of the athletes.

Banire said through the Governor’s support at the festival, Kwara was ranked the best among north central states and second in the whole of northern Nigeria, saying, “it has never been so good in the history of the state”.

Director of Sports of the state Sports Council, Mallam Alarape Ibrahim Atanda in his remarks confessed that the Edo 2020 is Kwara’s best since the last past five sports festival.

Alarape said the last festival in 2018, they got N7m from the government while this time, Governor AbdulRahman AbdulRazaq gave them N36m.

He then thanked the athletes for their dedication and commitment, charging them to do more for themselves and the state.