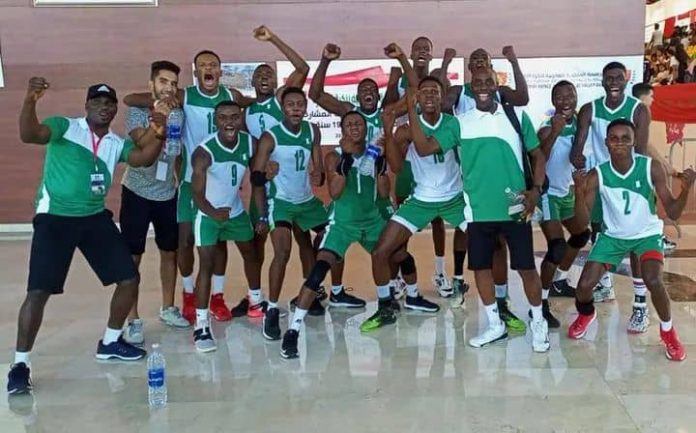 Nigeria are back to back champions of the U19 Boys African Nations Volleyball Championship.

Nigeria dictated the pace in the beginning of the first set as they led Egypt by 8-3 points before the Egyptians closed the gap; the Eaglet finally got their mojo winning by 25-20. Nigeria resumed the second set on a high note beating Egypt by 25-18.

The Egyptian began the third set on a high spirit, taking points alongside the Nigerian team. Both teams took points from 25 to 25 before Nigeria eventually won by 31 to 29 points.

The Head Coach of Nigeria U19 Boys Team, Adekalu Adeniyi praised the relentless efforts of the players against Egypt.

Adeniyi said the players played according to instructions from the first to the third set, dedicating the trophy to God and the Nigeria Volleyball community.

An elated Adeniyi said, “Today is the happiest day of my life in 2022 because Nigeria retained the trophy won in 2020. The players played according to the game plan from the blast of the whistle and never complained whenever they lost points.

“The players have shown greatness from the first day of the championship and exhibited a high level of discipline during the course of play.

“I want to thank God Almighty for the opportunity given to me as the Head Coach to win the U19 African Nations Volleyball Championship again. For record purposes, I and Coach Sani Mohammed won the 2018 African Youth Games title, emerged Champions of the 2020 U19 Boys African Nations Volleyball Championship held in Nigeria (as assistant coach); now I am lifting the trophy as the Head Coach.

“I want to also appreciate the Nigeria Volleyball Federation led by Engineer Musa Nimrod for their tremendous support to the success of the team as well as every Nigerian”.

Adeniyi said the players still have a long way to go despite their superb performance.

“All the players have special qualities in them and I strongly believe that they will become National Assets in the future”, he said.