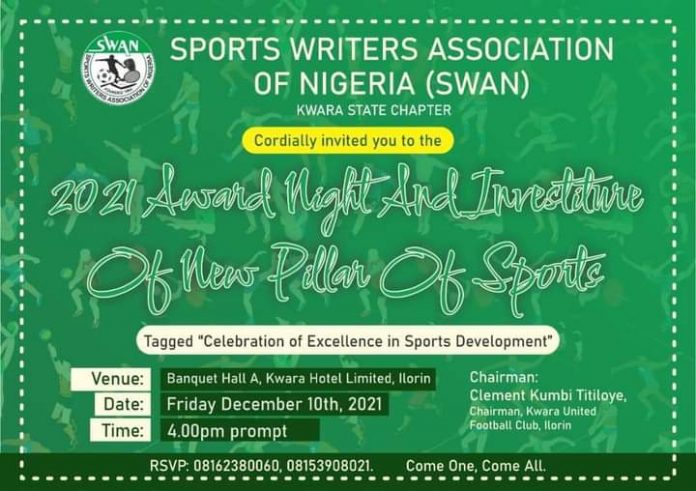 Arrangements have been concluded by the leadership of the Kwara State Chapter of the Sports writers Association of Nigeria to see the 2021 Kwara SWAN Award Night.

According to the Secretary of the Planning Committee, Owolewa Olayinka El-Hakeem, the award, which is tagged ‘Celebration of Excellence in Sports Development’ will hold on Friday, 10th December, 2021 at the Banquet Hall A of Kwara Hotel Ahmadu Bello way, GRA, Ilorin by 4pm.

Owolewa who urged all members to attend punctually said the event will also feature the investiture of Prince Oladimeji Ladi Thompson as the new Kwara State pillar of Sports.

The event will also see people who have done the state proud in the world of sports.

Expected to grace the event are the critical stakeholders of sports fraternities in the State.

From organising workshop for members, holding the annual SWAN games, the association under the leadership of Jimoh Bashir has witnessed significant progress which has now placed it strategically in the scheme of things in the state.

Altogether, 63 personalities, which include organizations, athletes, coaches and administrators, will receive various classes of awards.