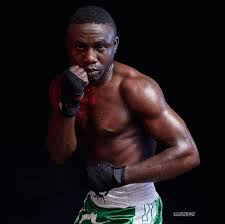 It has been revealed that the newly crowned World Boxing Federation (WBF) International Super Featherweight Champion, Ridwan Oyekola used to be a commercial motorcycle rider before fortune smiled on him.

This revelation was made on the BCOS TV Weekend Sports Programme, Saturday Breakfast Sports Show (SBS Show) when the new boxing champion featured on the programme.

Oyekola, who became a boxing champion last December when he beat his Argentine challenger Lucas Mathias Montesino, told the anchor of SBS Show, Boluwaji Ogunmola the story of how he rose from grass to grace.

“My rise to stardom was not easy. I did many jobs before I could make it. While struggling to make headway in boxing, I used to drive okada from Gate to Oje to Molete in Ibadan to make ends meet”, Oyekola disclosed on SBS Show.

Also digging the past of the new WBF Champion on the BCOS TV Saturday breakfast sports programme, his main promoter Sola Ayodele, also known as Sola Ford, recounted how he met Ridwan Oyekola and what made him to nurture him to stardom.

“Fate brought us together. I met Ridwan when he was working as an okada rider. He carried me on his okada and on our way I saw some people hailing and calling him ‘boxer’. Out of curiosity I asked him if truly he was a boxer. He confirmed it and later showed me some of the medals he won in boxing ring. I was impressed by what I saw in him and I decided to promote his boxing ambition. And we thank God, he has become a champion”, Ayodele recalled.

Sola Ford, who has about forty other boxers he is working with, hinted that more bouts will be organized for the WBF Champion in the new year.