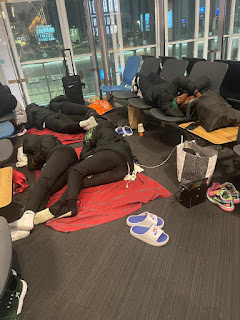 It is rare that a Nigerian national team travels to an international competition and returns sans drama, usually of the embarrassing and disgraceful variety.

And once again, that ugly devil strikes again, with the Under 20 women’s team stuck at the Istanbul airport on a 24 hour layover, sleeping on airport benches, and on the floor of the biting cold airport.

That is just the latest in a litany of troubles the team has faced while competing at the tournament.

Beneath their stirring performance at the 2022 FIFA Under 20 Women’s World Cup, the Falconets weathered and continue to weather head winds that not even adults should have to experience, let alone teenage kids.

Player sources say the team were provided very limited equipment, with just three sets of their green home kit and two sets of the white away kit. This meant the players had to wash their jersey by hand after every game, and were unable to exchange jerseys.

Worse, despite the NFF having an official kit supplier, the young ladies were not supplied official footwear and were asked instead to buy their own footwear.

And so the players – who are only getting paid $50 as daily match allowance and no bonuses – borrowed money to buy Nike sneakers and playing boots.

Worse was to come.

After their elimination against the Netherlands, the players had barely three hours to sleep before heading off to the airport, expecting to arrive home within a day or two. They were sorely mistaken.

“We’ve been on a trip to Nigeria since 6:30am Monday. We are currently sleeping at the Istanbul Airport awaiting a 6pm Wednesday flight Istanbul time to Abuja.”

How did that happen?

According to team officials, their tickets were booked for Tuesday evening on Avianca.

But the Colombian flag carrier rebooked the team on Turkish Air leading to a four-hour delay in Colombia. That, coupled with a stop in Panama meant the team missed their Tuesday connection flight.

NFF’s Leader of Delegation Ruth David tried in vain to ask the airline for accommodation, but without transit visas, the pleas accomplished nothing and the team were forced to spend 24 hours at the airport awaiting their connecting flight to Abuja

But their struggles will not end when they arrive in Abuja. The players have been given N40 000 each as local transport allowance.

Meaning that after three days of grueling travel, they would have to travel by road (or train) from Abuja to whatever state their final destination is.

To be a Nigerian