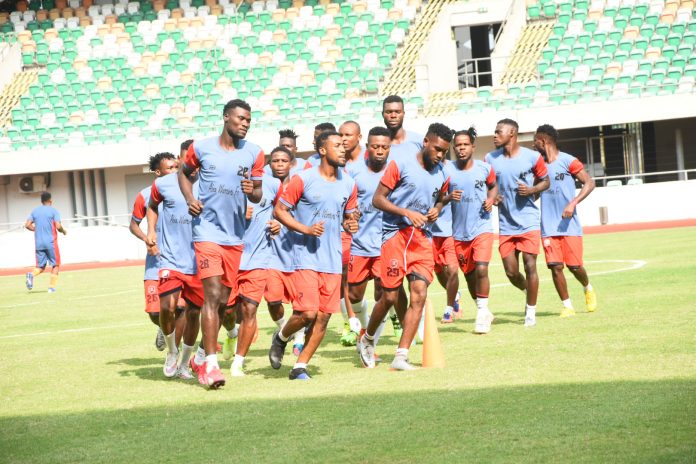 The hard-fighting Akwa United narrowly moved past Abia warriors at the Godswill Akpabio Stadium on Saturday in the matchday 3 of Nigeria Professional Football League.

United went all out in the early minutes of the game to pick three points. Ndifreke Effiong scored from close range after Nwani’s pass was allowed through.

There was almost an equaliser for Abia Warriors in the 26th minute. Nzube Anaezemba’s acrobatic volley was brilliantly kept out by goalkeeper Jean Efala.

From the corner, the ball was worked to Ibukun Harrison at the far post and he applied an unstoppable effort into the roof of the net for the equaliser. Suleiman Shaibu, the goalkeeper trainer of Abia Warriors was sent off by the center referee.

Akwa United made two changes at the break. Wisdom Fernando and Ubong Friday were in for Samuel Amadi and Morice Chukwu.

After a rough display inside the box, the Referee made a penalty call and Ndifreke Effiong scored from the penalty spot to give United the lead for the second time in the game.

In the 65th minute, Fatai Abdullahi received the ball from Lukman Bello and he fired from range to Jean Efala.

After scoring twice in the game, Ndifreke Effiong struck the crossbar again. His effort from 20 yards came off the frame.

There was almost an equaliser for Abia Warriors in the first minute of additional time. Fatai Abdullahi’s effort came off the foot of the post as it hit the woodwork.

The game ended in 2-1 in favour of the host and Abia Warriors remains at the bottom of the table.

Kwara United Coach Abdullahi Biffo was sited at the Nest of stadium today where he came to spy on Akwa United and when asked what he was doing at the stadium by the media, He said: