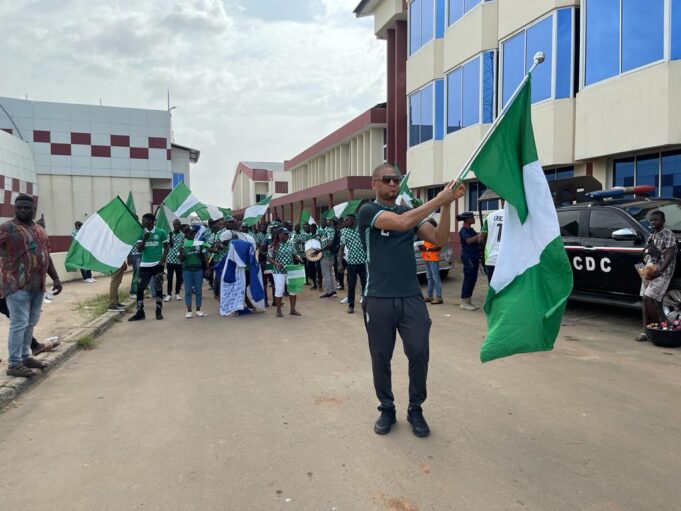 It was another fruitful outing for the extremely supportive Authentic Nigeria Football and Allied Sports Supporters Club ANFASSC on Saturday as the Nigeria Under 23 team defeated their Tanzanian counterparts 2-0 at the Lekan Salami stadium, Ibadan.

In its usual style, ANFASSC led by its National President, Prince Abayomi Ogunjimi, the Supporters club took to the street to mobilize support and create awareness for the Salisu Yusuf tutored side before the kick off.

ANFASSC also made its presence felt all through, colourful on the street, instrumental at the stadium while the game was ongoing, and dynamic, even at the end of the game .

The drums, trumpets and other instrument didn’t stop, the Olympic Eagles got the support they needed and they made it count with the victory.

The National President of ANFASSC, Prince Abayomi Ogunjimi at the end of the game said “We are always glad doing this, thankfully the boys delivered all that matters most in a very difficult game, when they assemble again in the next round, we will travel with them to cheer them to victory by God’s grace”

“They are next to the Super Eagles in National team rating, and they have to be treated with all sense of importance, we are glad we have won”