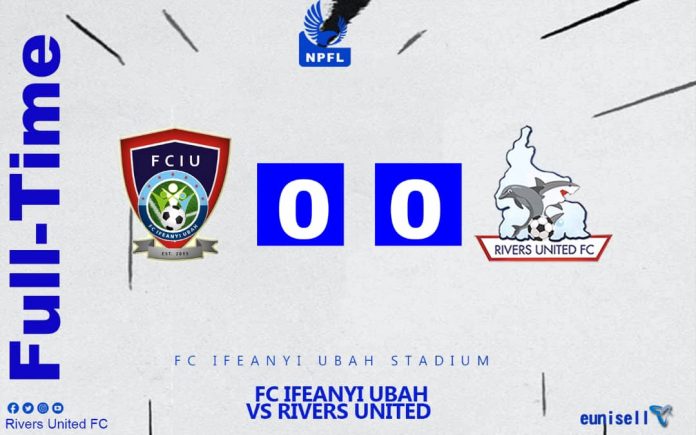 Abiodun Akande was the hero as Rivers United earn a valuable point in a highly-entertaining matchday fifteen 0-0 draw against FC Ifeanyi Ubah.

Akande made series of fine stops during the match to ensure the “Pride of Rivers” return to Port Harcourt with a point.

6 days on from Sunday’s NPFL 2-0 home win against Jigawa Golden Stars, Stanley Eguma made two changes to his side for this clash and United made a confident start.

There were little more than two minutes on the clock when Rivers United carved out the best opportunity of the opening period as Godwin Aguda’s superb pass set Nelson Esor free down the left but his effort towards goal went just off target. Fortune Omoniwari saw his effort tipped over the bar few minutes late. Then Godwin Aguda shot was saved by Usoigwe Sharp in the second.

In truth there was little of note during the first half for the home side but just before the stroke of half time Abiodun Akande was called into action to push away Ekene Awaziem’s header.

It was almost a let-off, and after the interval Akande had to be alert again to palm away Abel James header from close-range effort.

Abiodun Akande was the busier of the two goalkeepers in the second period, and was called into action on the 52nd minute to keep out Ekene Awaziem’s firm strike, and then again moments later to palm away Emmanuel Uchegbu’s fierce effort.

Neither side could make the breakthrough after ninety minutes of action.