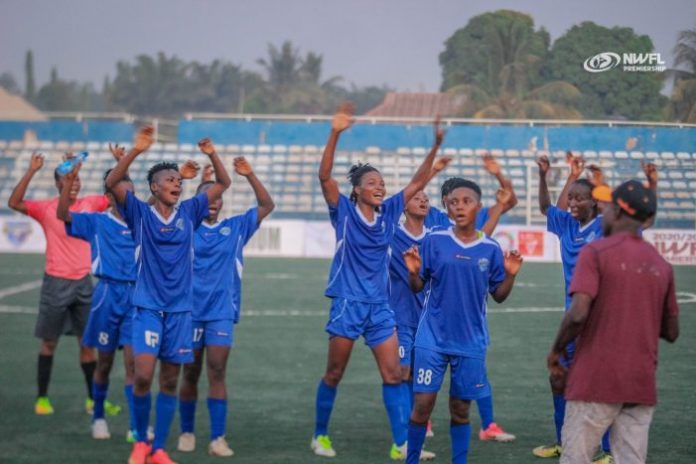 While the dust is gradually settling on the sudden change in the format of the Nigeria Women Football League (NWFL) from straight format to abridged version, with the top six clubs on the log proceeding to the Super Six playoff, club owners have come with another twist to the whole drama by rejecting the idea to end the regular season after matchday 13.

In a 360 degree turn, the club owners who had earlier voted, in a virtual meeting with the league board for the super six and relegation play offs have rejected the decision and rather want the league to continue with match day 14 games.

This stems from the virtual meeting held by the club owners and managers on Friday, running through Saturday afternoon.

In the communique released by the club owners after the meeting, they want the season to continue with with the initial straight format and resume with Matchday 14 matches instead of going ahead with the Super Six and Survival Play-Offs.

They also proposed finalists at the last NWFL season should represent Nigeria in the CAF Women’s Champions League zonal qualifiers, thus putting to rest the need to end the abruptly.

According to the club owners, since the league didn’t end due to the need to meet up with next season’s continental commitment, it was logical to hand the tickets to those who reached the final of the last NWFL women’s play off in 2019.

It will be recalled that Rivers Angels pipped Confluence Queens 1-0 at the 2019 playoffs final in Lagos.

The owners also elected to have no relegation of teams, rather proposed for the restoration of the league to its original 16-team format of which two promoted teams will complete the number if no teams are relegated.

This is due to the fact that Heartland Queens and Adamawa Queens were expelled by the NWFL due to non compliance with club licensing.

According to feelers from the meeting, only three clubs disagreed with decision of the Club Owners.

The NWFL Super Six is scheduled to hold in Ijebu Ode starting from the 19th of April, 2021 of which the winner will be crowned the league champions and qualify automatically for the CAF Women’s Champions League while the runner up will proceed to the WAFU Zonal qualifiers scheduled for May.